This low carb bread pudding tastes SO good! It is loaded with cinnamon and chocolate, and is a fantastic sugar free and keto-friendly dessert! 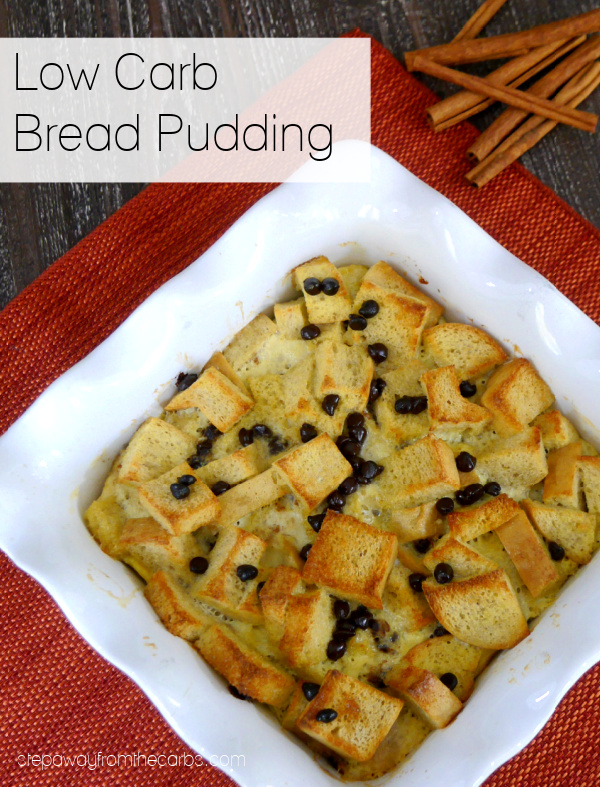 This is a sponsored post written by me on behalf of Netrition. All opinions are my own. Please see my disclosure policy. This post also contains affiliate links, which means that at no extra cost to you I can make a tiny bit of money to help support this blog. Thank you!

Perhaps you think I've gone completely mad by suggesting a low carb bread pudding recipe? I have to say it isn't something that I thought I would ever be eating on a low carb diet, either! However I was recently given the opportunity to try Love the Taste Bread by Thin Slim Foods.  They have several flavors: Plain, Honey, Cinnamon, Everything and Rye, and I chose cinnamon! 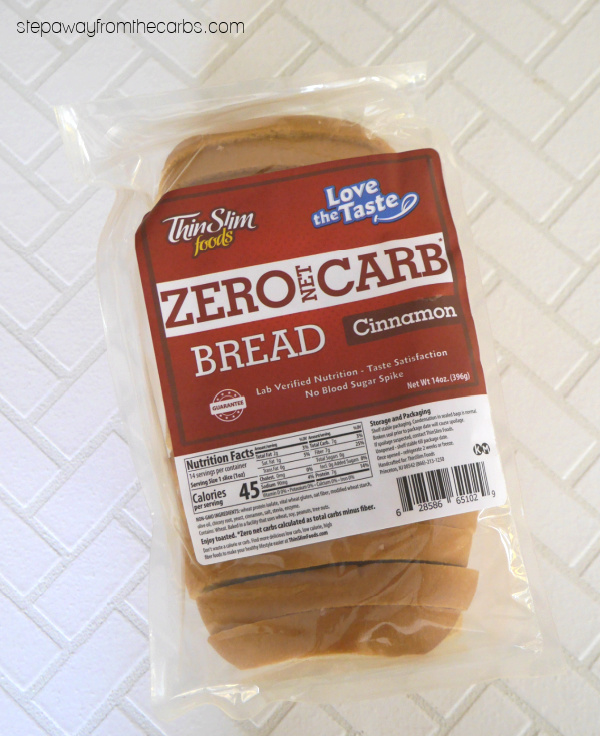 The bread is very good – lightly toasted, lashings of butter – perfect! And at only 1g net carb per slice – I'm completely sold!

But as much as I like eating it the “normal” way, the slight sweetness of it made me think of bread pudding. So I came up with this recipe that needs just SIX ingredients and I just know that you're going to love it! Oh and if you're looking for a low carb bread and butter pudding (as it is more commonly known in the UK), this is VERY similar. A traditional recipe would have raisins in, but I think that chocolate chips make a great alternative! Update: If you think you'll miss the raisins, try adding a handful of my homemade low carb dried cranberries instead!

Cut the bread into cubes and place them in a bowl. Pour some unsweetened almond milk and melted butter over the bread – you'll get an instant cinnamon aroma! Leave the bread to soak for ten minutes.

In a separate bowl, mix together eggs and low carb sweetener (Lakanto works well – I particularly like the golden version for this recipe). 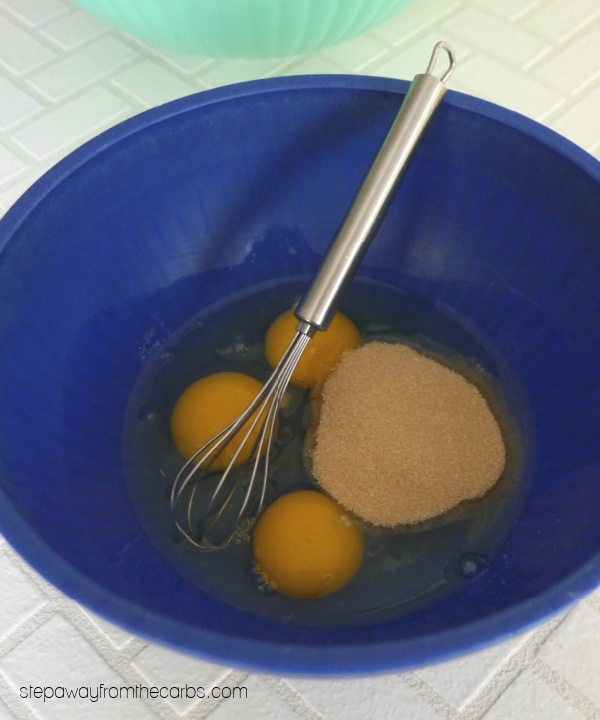 Pour the egg mixture over the bread, and add some low carb chocolate chips – I use these mini ones from Lily's. 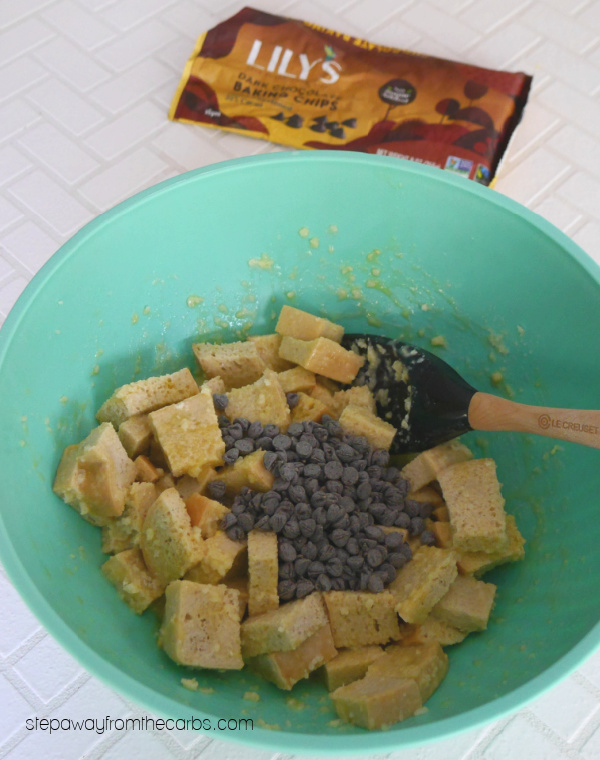 Spoon everything into a greased baking dish, and push the bread down so that it is in the liquid as much as possible. 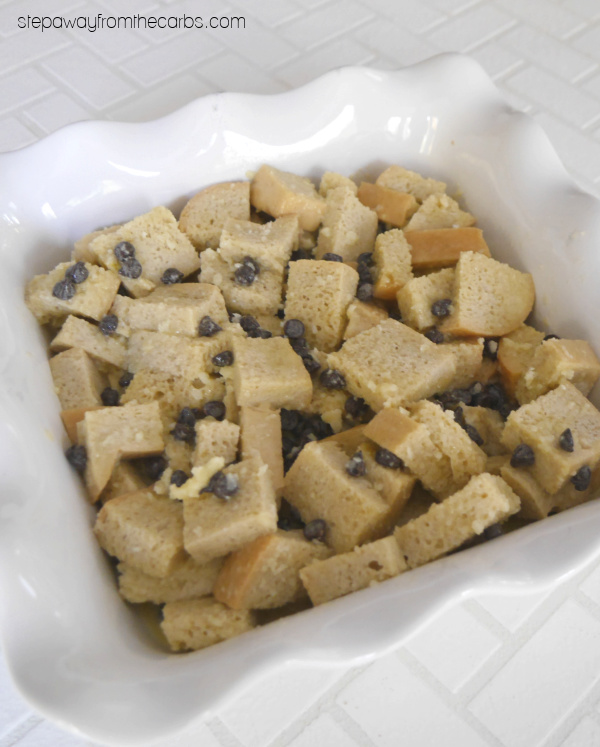 Bake in a preheated oven for 30 minutes or until the egg mixture has set. It smells SO good while it is cooking!!! Let cool for five minutes, then serve. 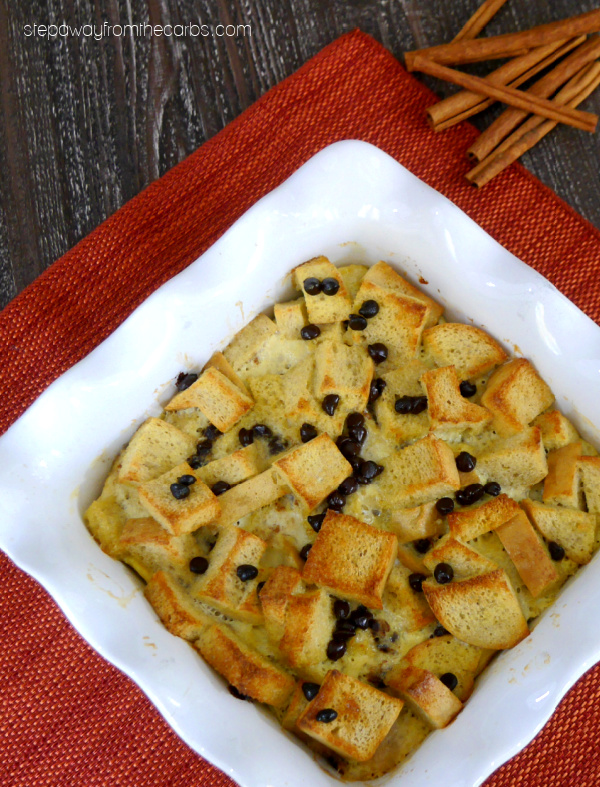 This is a fantastic dessert to enjoy on a fall or winter's evening! 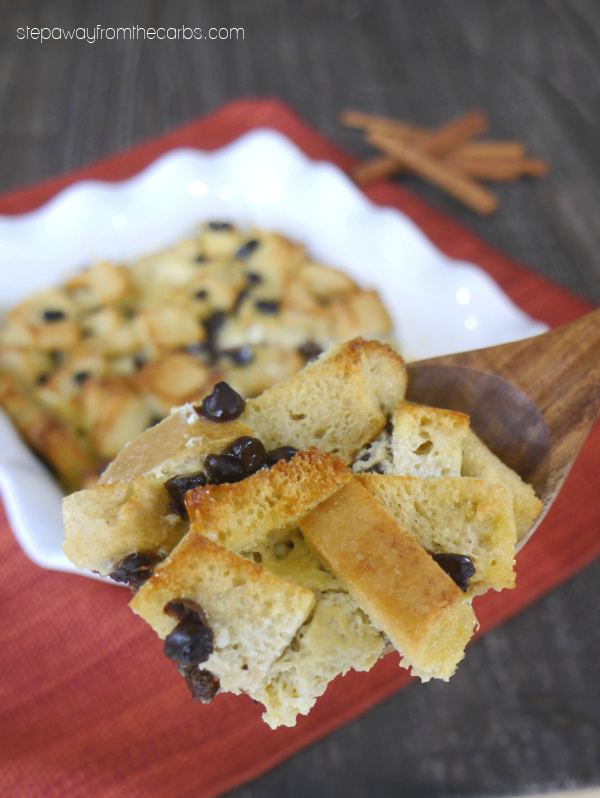 Yield 4 Serving Size Quarter of the pudding
Amount Per Serving Calories 202Total Fat 18gSaturated Fat 9gCholesterol 153mgSodium 117mgCarbohydrates 8gNet Carbohydrates 4gFiber 4gProtein 6g
Remember to head on over to Netrition and order some Love the Taste Bread today (and pick up some other low carb goodies while you're there)!!

This is the best low carb bread pudding by far. Thank you for sharing

I'm so glad you liked it - thanks for letting me know!

Can't wait to make this we love bread pudding! Any chance you know a good sugar free icing recipe to put on top?

There's one I made for my cinnamon rolls that might work! https://stepawayfromthecarbs.com/low-carb-cinnamon-rolls/

Could this be made to sit overnight and cooked the next day?

I'm actually making this again this week - so I'll let you know in a couple of days!

[…] Sugar Free Bread Pudding is an easy way to turn it into a sweet keto dessert! […]

What is the equivalent measurement for 30 grams of chocolate chips?

30g is just over 1 oz. With these mini chocolate chips it works out to about three tablespoons. Enjoy!