These low carb hash browns are made with daikon radish! It's a delicious brunch recipe that is the perfect accompaniment for a fried egg! 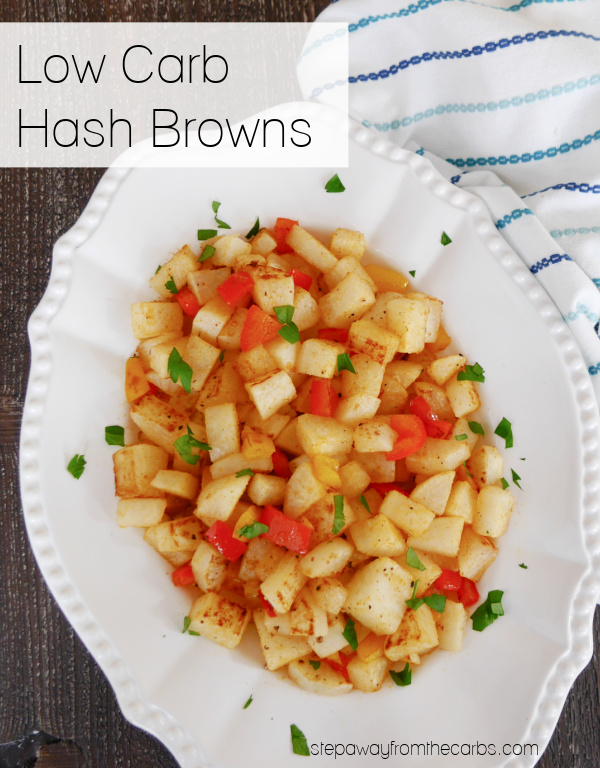 Growing up in the UK, “hash browns” only meant one thing to me: the fried potato cakes that you could get at McDonald's. However, after living in the US for over a decade, I have visited many diners and have come to appreciate that there is much more to this term than I first thought!

What Are Hash Browns?

Here's what wiki says (just in case, like me, you weren't certain of the actual definition):

Hash browns, are a popular American breakfast dish, consisting of chopped potatoes that have been fried until browned. Hash browns first started appearing on breakfast menus in New York City in the 1890s. Hash browns are a staple breakfast food at diners in North America, where they are often fried on a large common cooktop or grill. The word “hash” is derived from the French word “hacher” which means to hack or chop. This means hashed browned potatoes literally translates to ‘chopped and fried potatoes'. “

So far I have one other hash on the site – a low carb butternut squash hash that also includes turnips (surprise!) to bring the carb count down. Well I've gone one step further with this recipe and used daikon radish! 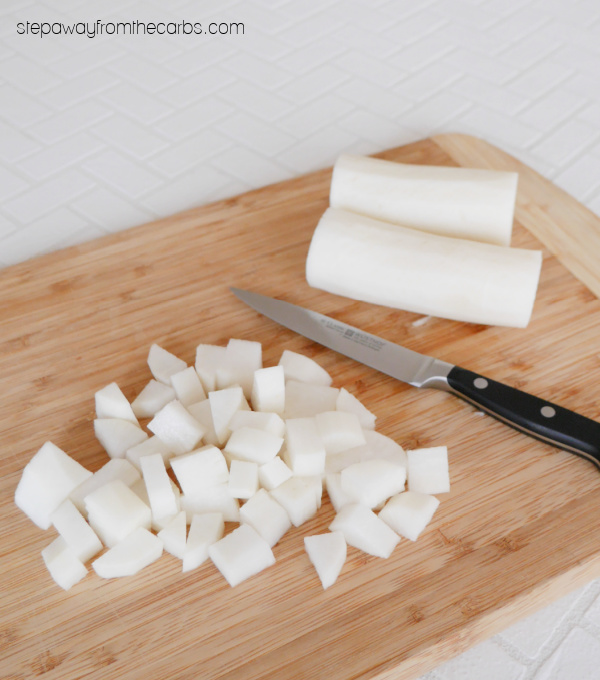 The peel of a daikon is edible, but it contains a lot of the potent mustard flavor, so I recommend removing it for this recipe. Does the final result LOOK like a regular potato hash? YES. Does it taste like it? Well, not quite. But does it contain a fraction of the carbs? OH YES.

Place a large non-stick skillet over a medium heat and add some olive oil. Add some peeled and diced daikon, together with some onion powder and a little paprika. The paprika isn't essential and you don't need much – but I love the color and subtle flavor it adds to the dish! 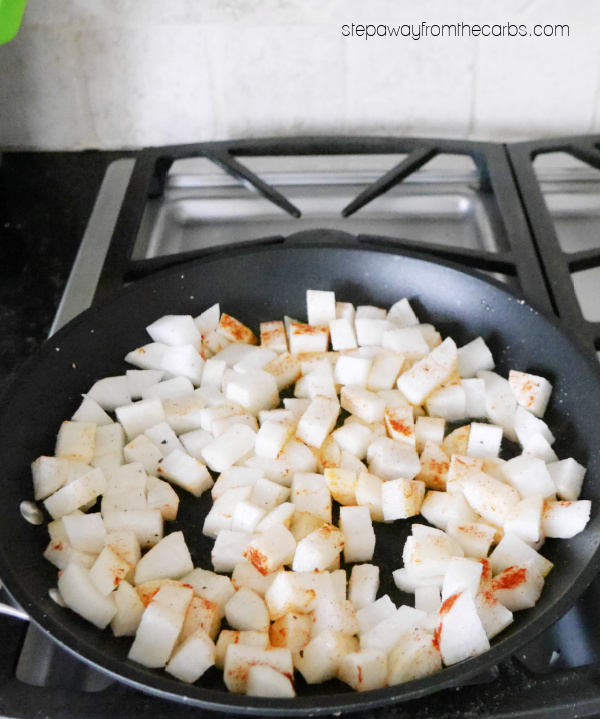 Cook for about five minutes then add some chopped bell peppers. I used a combination of red and yellow peppers, as I happened to have both in the fridge. But any color is fine! 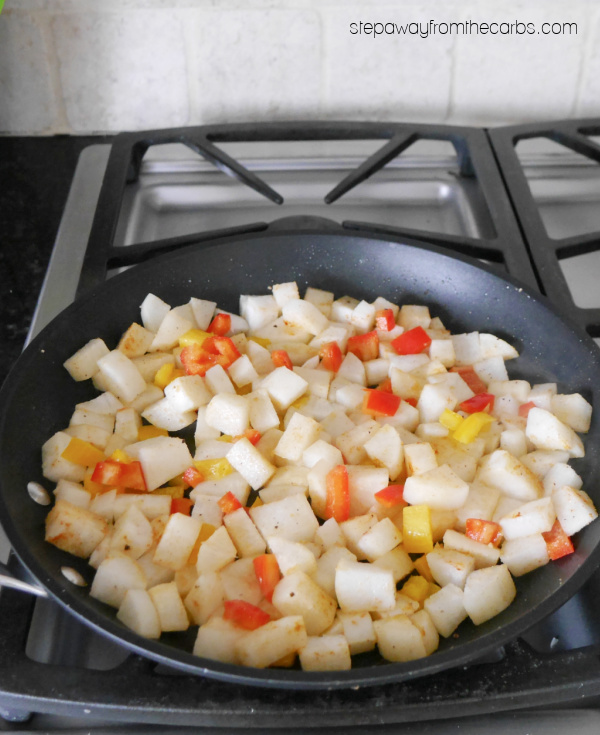 Continue cooking for 10-15 minutes or until the daikon is tender, stirring regularly. Season with salt and pepper. 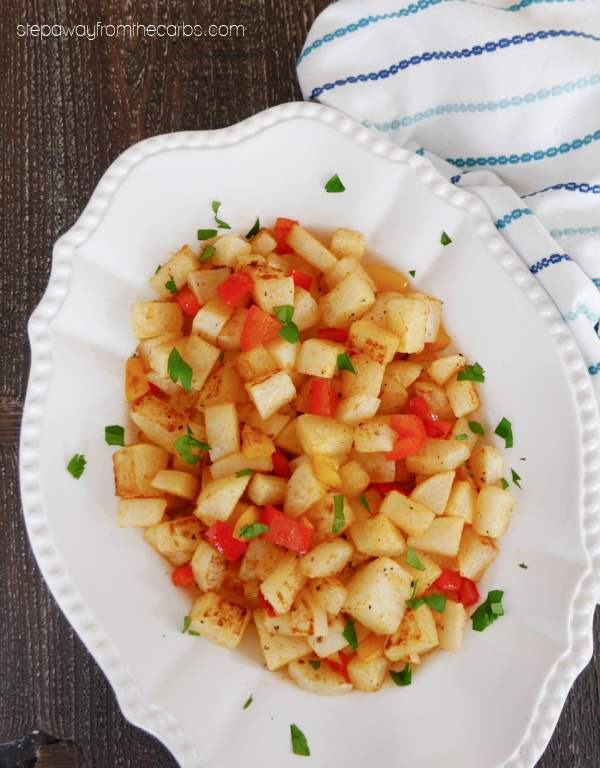 These low carb hash browns combine perfectly with a fried egg! A meatless vegetarian brunch that won't disappoint on flavor! 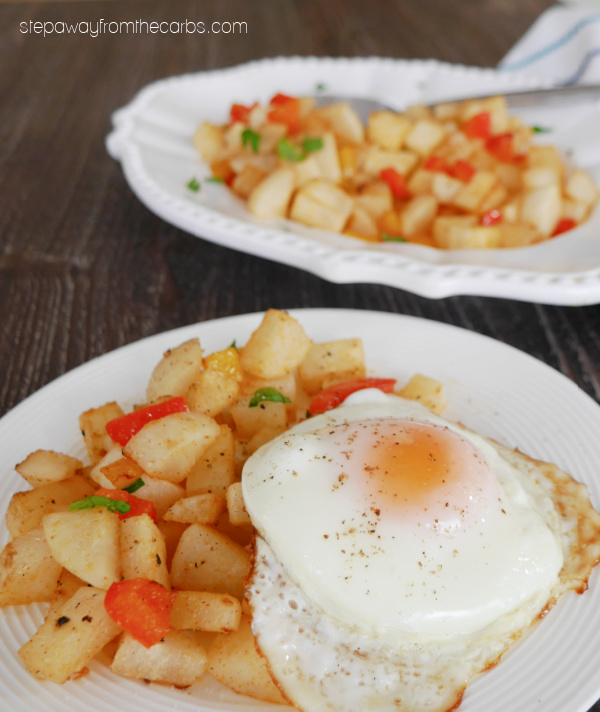 3g net carbs per serving (quarter of the recipe, fried egg not included)