These keto tuna patties are made with canned tuna and are SO easy to make! A gluten free recipe that is very low in carbohydrates. 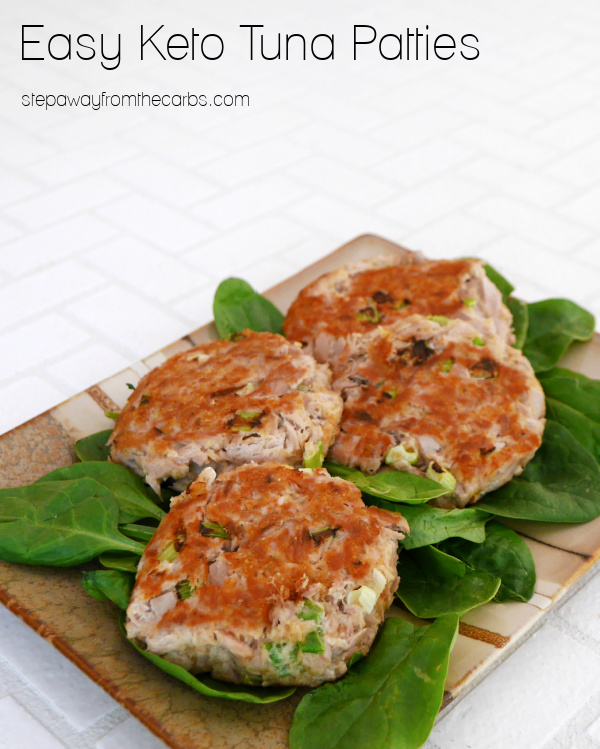 When I started this blog in 2008, on my “About Me” page I listed the style of my recipes so that readers knew what to expect. This included short ingredient lists, many single-serve recipes, and so on. I also included a list of ingredients that I didn't like – which I have since removed because it seemed rather negative! But it included foods like avocado (which I *totally* eat and enjoy now!), green bell pepper (which I eat grudgingly), coffee (still no way!), peanuts (ditto), and canned tuna.

I love all fish, seafood, and shellfish. Apart from canned tuna. The only recipe (until today!) on this site with canned tuna is the low carb Thai Tuna Salad – which my cousin Fiona wrote as a guest post! So why change now? Oddly enough it is because I was recently cat-sitting for a neighbor and I got used to that fishy wet cat food smell!

After a little research I discovered that many people preferred the canned tuna in water instead of oil, as the taste wasn't so strong. And I decided to add an ingredient to the tuna that I've used before when I'm not sure about the taste of something (eg cabbage, Brussels sprouts…) – BACON! Well more accurately – pork. Because once I knew I wanted to make tuna patties pork panko was the perfect replacement for breadcrumbs or regular panko – and added some extra flavor, too!

Thoroughly drain a large can of tuna – I used chunk light tuna in water – and place it in a bowl. 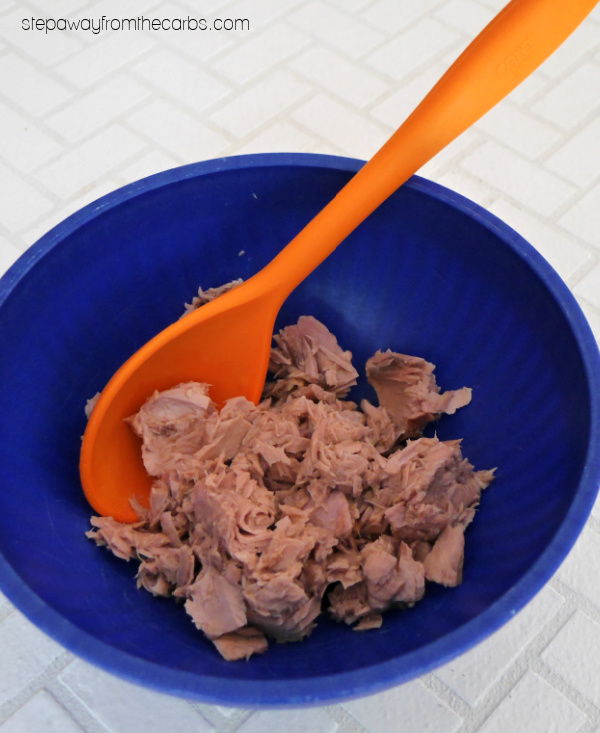 Add the pork panko, an egg white, mayonnaise, sliced green onions, and a generous amount of salt and black pepper. 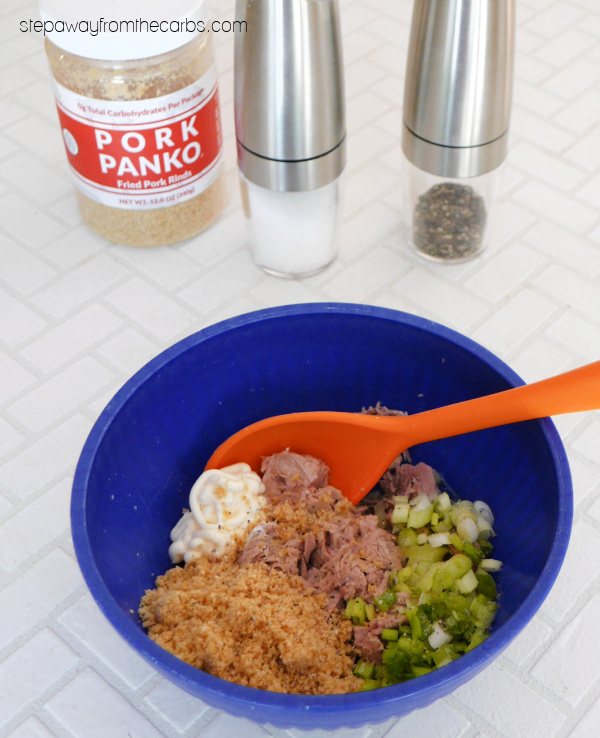 Mix well to combine. Heat a non-stick skillet over a medium-high heat. Form the tuna mixture into four patties, and place them in the skillet. Cook for about 2-3 minutes on each side until golden brown. 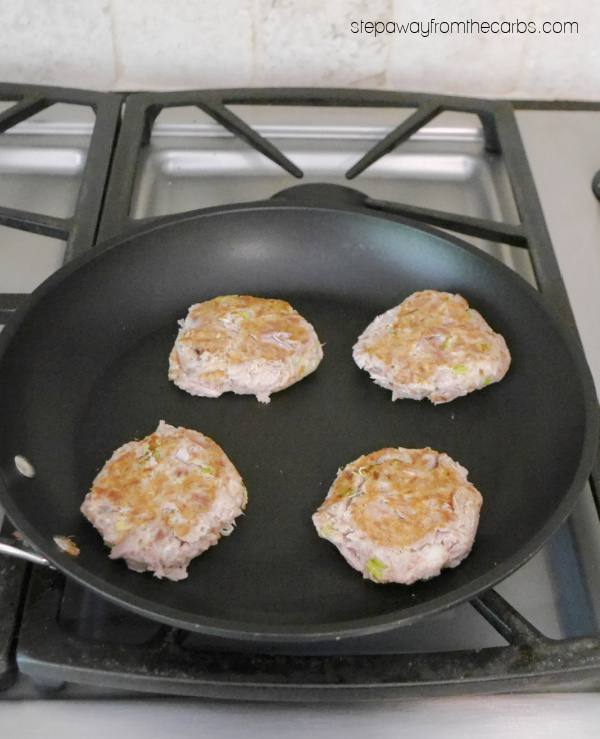 And I have to say – they tasted REALLY good! The pork panko added a lot of flavor as well as help keep the patties together, and really tempered the strong fishy taste, resulting in the tuna being a lot milder! 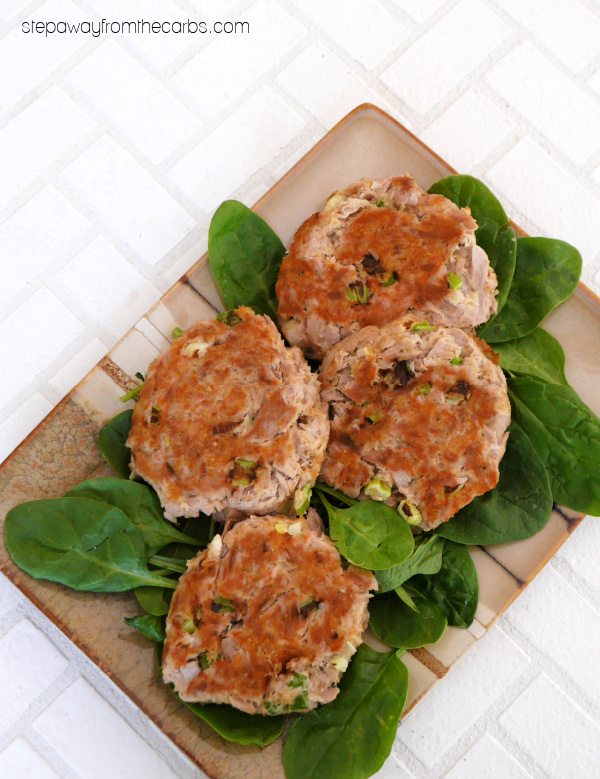 I've listed this recipe as a lunch or main meal – because it just depends what you serve with it. A crisp green salad or some baby spinach will keep the meal light, but you might prefer to serve the patties with one of these low carb side dishes to make it more substantial. 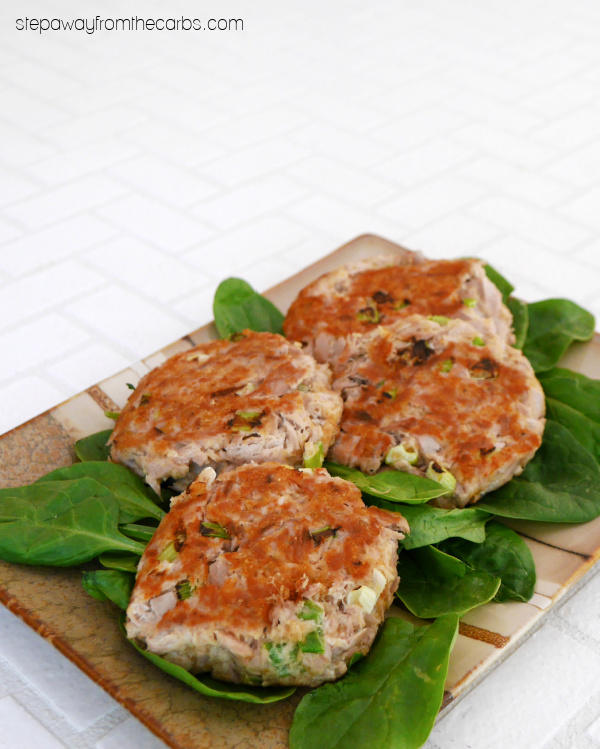 0.9g net carbs per serving of two patties (half the recipe)