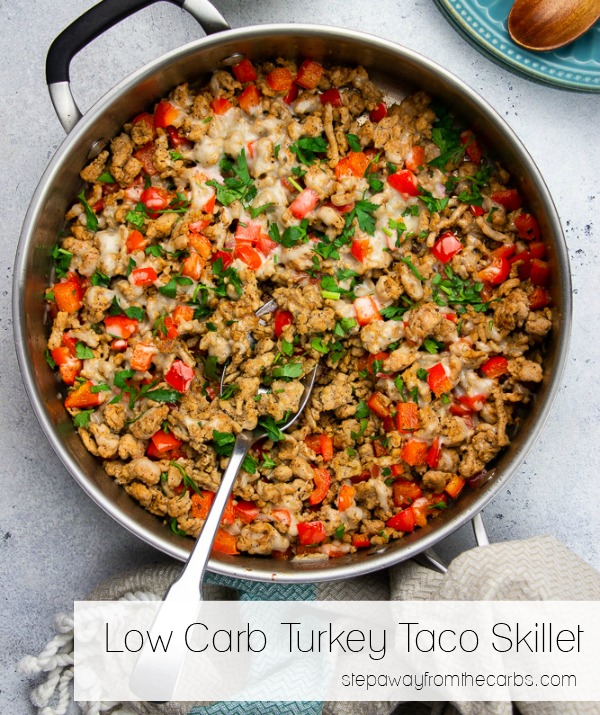 With just a few ingredients you can create something so tasty! This is definitely going on my regular week night menu, because it really doesn't take very long to make and as long as I have ground turkey and a bell pepper – everything else I have in anyway!

Watch my recipe video tutorial or scroll down for the full instructions and printable recipe card!

How to Make a Low Carb Turkey Taco Skillet

Heat some oil in a large skillet. Add ground turkey and onion powder. Sauté until the meat has browned.

Add paprika, ground cumin and dried oregano (my favorite flavor combination for any Mexican dish!) and chopped red bell pepper. If you want to know how many carbs in red bell pepper – it's only 3.3g net carbs for the whole pepper! It adds color and flavor too – perfect for this recipe! 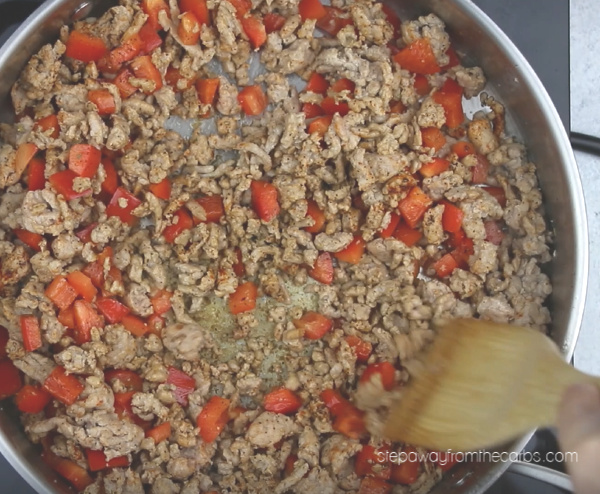 Continue to cook until the pepper has softened. I haven't added salt to the recipe because personally I don't think it needs it – but of course feel free to do a taste test and adjust seasoning as necessary.

Sprinkle some shredded cheese over the turkey (I use a Mexican blend) and cook until the cheese has melted. 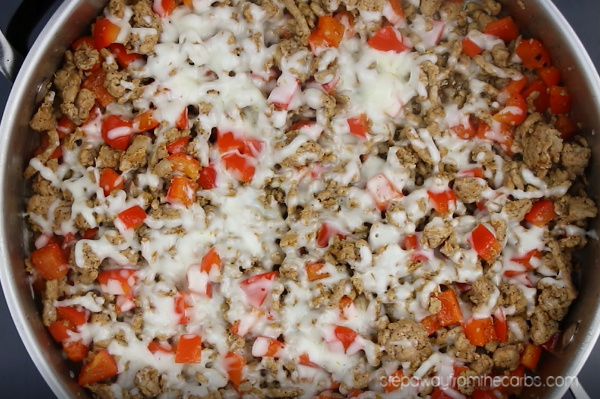 Remove from the heat and scatter over some chopped fresh cilantro. 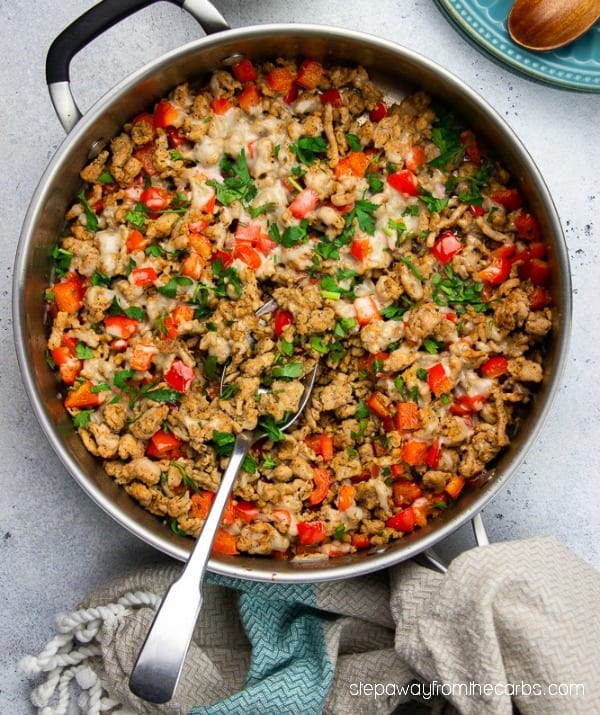 Serve with shredded lettuce, sour cream, and/or low carb wraps! This is a pretty big serving for two people, although if you just had lettuce and sour cream and were super hungry – you'd probably manage it! When my husband and I shared it we ate about two thirds with wraps, and there was enough left over for me to have as lunch the next day – bonus! 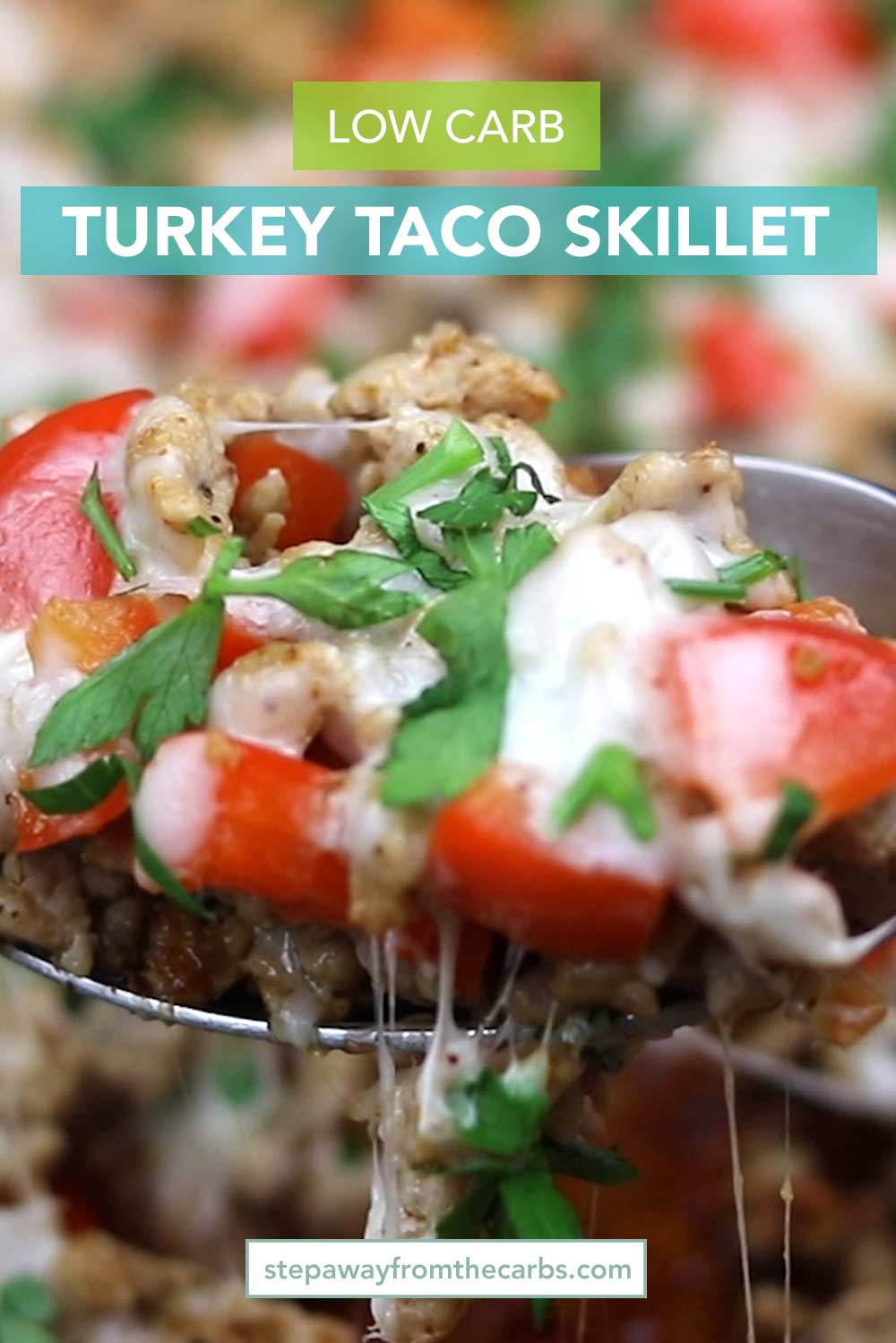 Check out all my ground turkey keto recipes!

4g net carbs per serving (based on two servings)
Lettuce, sour cream, and wraps not included.

I like the idea of this, but I would make it 4 servings for us, based on the protein levels. My understanding has long been that eating too much protein is the same as eating too many carbs. I would be interested to know if there is information to counteract what I learned.

Made this tonight and added a can of Rotel. Everyone liked it! Thank you for the inspiration!

Had Turkey in the refrigerator and needed to cook today. Googled a Turkey recipe and found this one. Very simple to follow. Just need to add a little more seasoning. Thanks for the recipe.

I'm so glad that you liked it!

Keto on a Budget: How to Eat Keto & Low Carb for Cheap!

I have tweaked this just a little bit, as I am on a very low carb diet. Can't have the oil or the cheese! But it is still quite excellent without those two ingredients. I wish I had this recipe for tacos when my kids were young ! I cook my ground turkey in a splash or two (as needed) of beef broth. This gives it a little bit of a beef flavor and seems to help it from drying out. I also found that I am using 1 1/2 tsp each of the seasonings. I put 4ozs of this mixture on a garden salad with salsa. Yum!