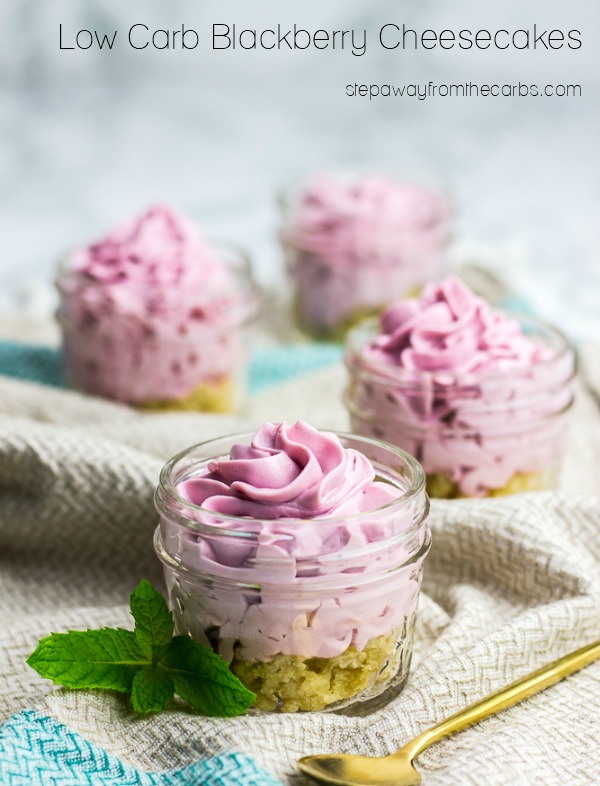 As you may have noticed I'm not a BIG dessert kind of girl. To clarify, I like desserts, but I don't go in for big pies and cakes very often that serve 8-12. The main reason for this it is usually just my husband and I in the house, and if there is a delicious dessert sitting around in the fridge I want it to get eaten. By me. Then the portion sizes start to increase, and the carb count goes off the scale.

So I much prefer individual portions for dessert. Not only is it easier to make them in smaller batches, but (for me) it highly increases the chances of  just having one serving. So this is why I have for you today: Individual No-Bake Blackberry Cheesecakes. Low carb and sugar free. And REALLY tasty.

Watch my recipe video below or scroll down for the full instructions and printable recipe card:

How to Make Low Carb and Keto Blackberry Cheesecakes

This recipe comes in two stages. Stage one is in two parts. In a small bowl, whisk heavy cream and vanilla extract until stiff peaks form. Cover and place in the fridge.

Then make a blackberry syrup in a small saucepan from fresh blackberries, low carb sweetener (I used Lakanto – get 20% off if you use coupon code SAFTC!), and a little water. 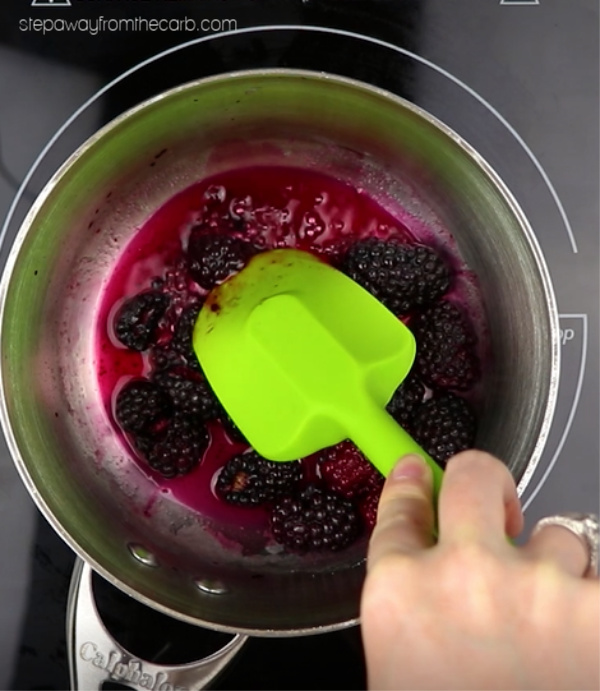 Cook over a low heat, mushing down the blackberries to release the juice. After around 10 minutes, remove from the heat and push the mixture through a fine sieve. Discard the pulp, and set the syrup aside to cool. 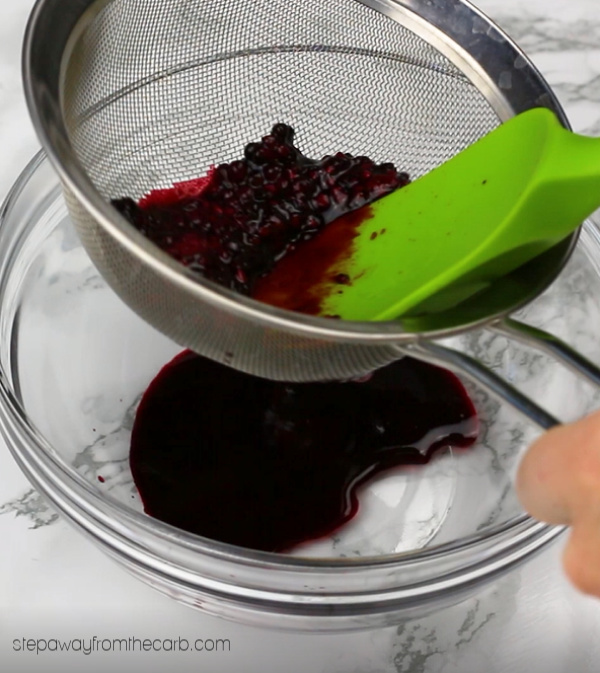 Stage two! First, make the base by mixing together almond flour and melted unsalted butter. Divide the mixture between four small bowls or ramekins. 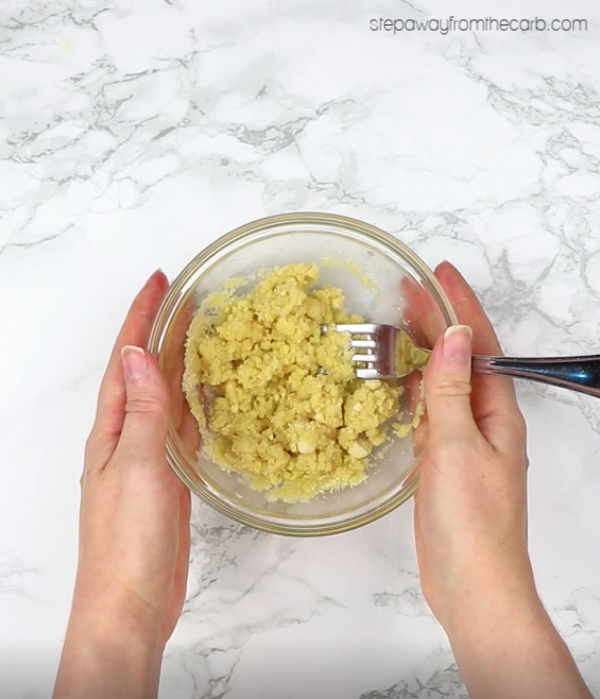 Add softened cream cheese, sweetener, and the cooled blackberry syrup to a stand mixer bowl. Beat them together until fully combined. 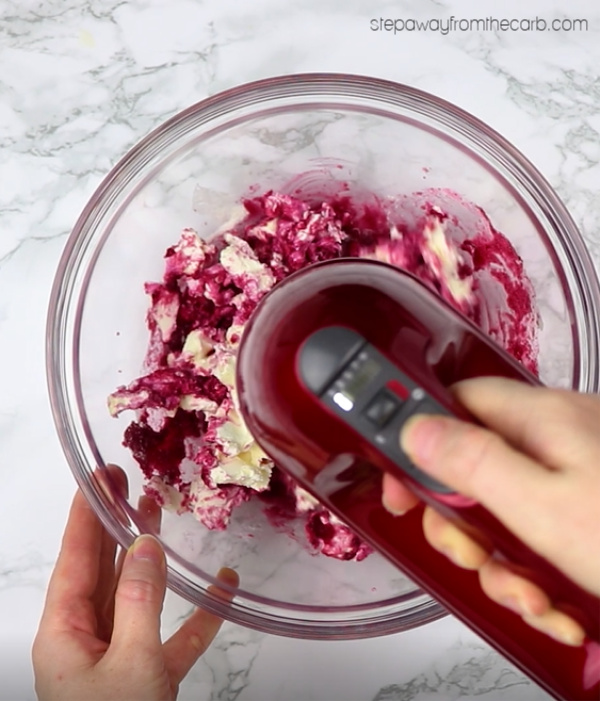 Gently fold the whipped cream into the blackberry mixture. 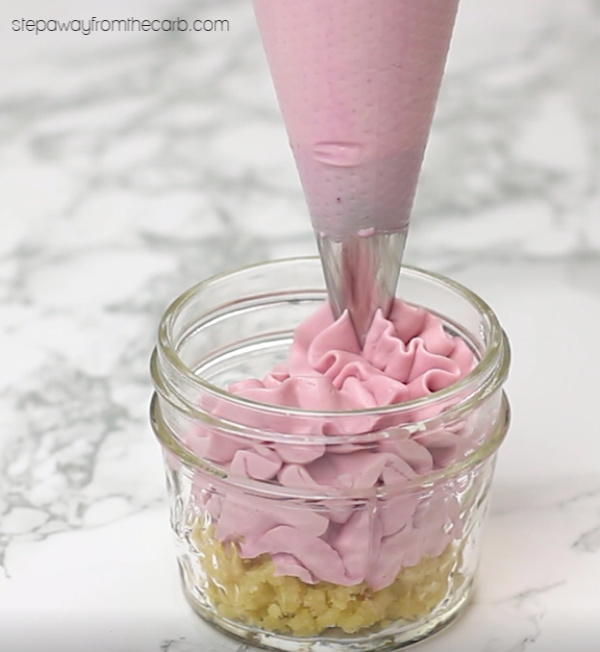 The combination of the buttery, nutty base and the fruity creamy topping is SO good! 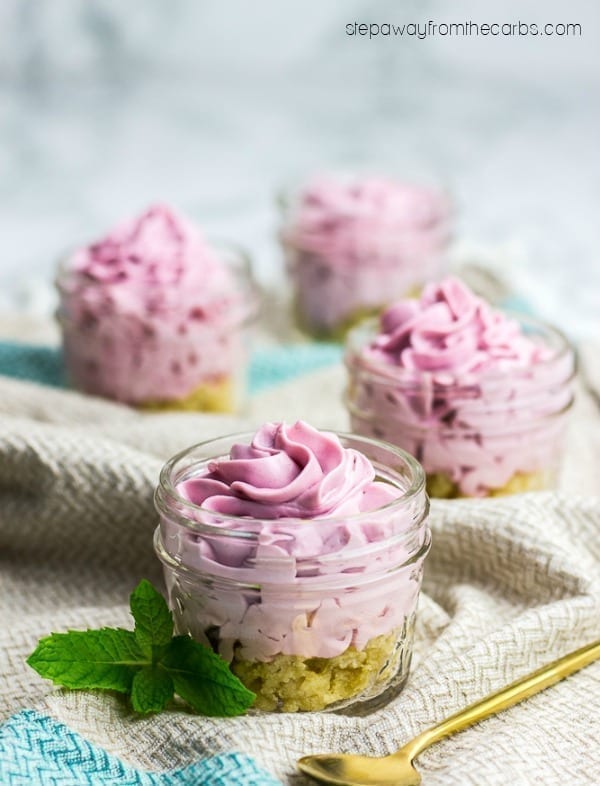 These are the bomb ! I make the blackberry along with raspberry and strawberry as well . Delicious!

Absolutely delicious. This recipe is a keeper. I made these cheesecakes for a baby shower, I used small mason jars and it was perfect!! I also made some ahead and put them in the freezer, they were also good. A great make ahead gluten free dessert. I used honey instead of sweetener and saved the pulp from the fruit and mixed it with my morning yogurt, so good. A great hit, everyone asked for the recipe.

Thank you so much!!!

Loved this easy dessert. I made some with blackberries and others with raspberries. Both were delicious. I used honey instead of artificial sweetener. I love the convenience of individual servings. This recipe is a keeper, I will definitely make it again.

These are totally yummy but I think because of them being so rich that you could make 6 servings out of one recipe instead of 4. Maybe even shot glass desserts?? True them for sure, you won't be disappointed.