Here's my guide to low carb milk alternatives, including carbohydrate counts and best uses! A handy list for anyone starting a keto or low carb diet. 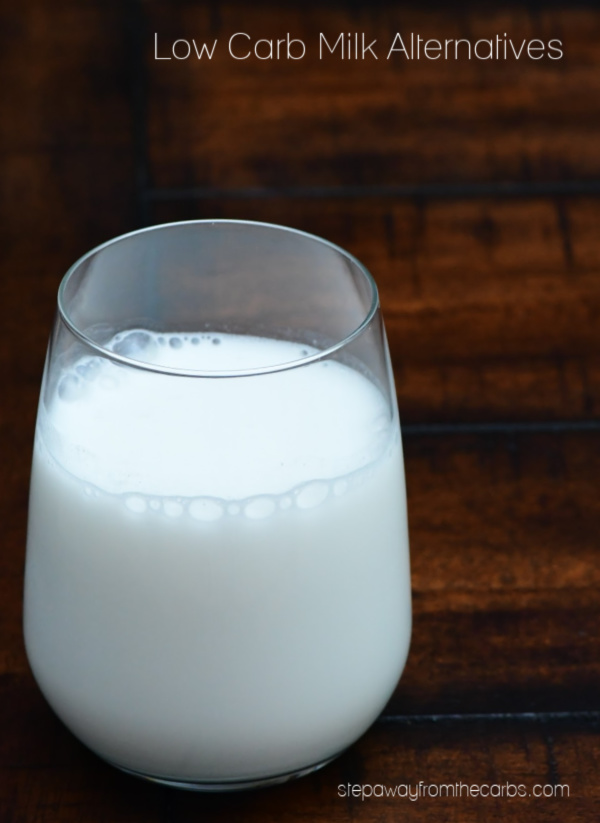 When you starting out low carbing – there are SO many changes to make. I mentioned a lot of substitutions for every day ingredients in my 28+ Low Carb Hacks article – so you might want to check that out too!

A cup of cow's milk contains 11-12g net carbs, regardless of whether it is whole milk, 1% etc. With many people trying to stay under 20g of carbohydrates per day – it just isn't possible to drink very much of it, so it's best to look for other options.

The first thing that I should mention is that it really depends what you're using milk for. Because you wouldn't necessarily use the same alternative for a shake as you would do a soup.

Which milk has the least carbs?

You'll notice that the emphasis is on unsweetened! Always choose these varieties and add sweetness yourself if necessary. When I started low-carbing nearly ten years ago, the only low carb milk alternative was soy milk – and I'm personally not a fan. These days I always have unsweetened almond milk (I like the Silk brand with a light vanilla flavor) and heavy cream in the fridge – and one or both of these substitutes covers me for most uses!

Water might seem like an odd alternative but when you need to add bulk and liquid to a sauce, it can work! Oh, and just in case you're looking for condensed milk, check out this low carb condensed milk recipe from All Day I Dream About Food!

How you use these substitutes is really a matter of personal preference. For example, some people like almond milk in their coffee or tea – for others it doesn't work at all!

Do you have a favorite low carb milk alternative? Let me know in the comments!

If you send out emails on any alternative keto recipes or choices, very interested. I am on keto but have many food allergies.