These low carb stuffed peppers are filled with ground turkey, cauliflower rice, and cheese! A really tasty keto recipe to enjoy for lunch or dinner! 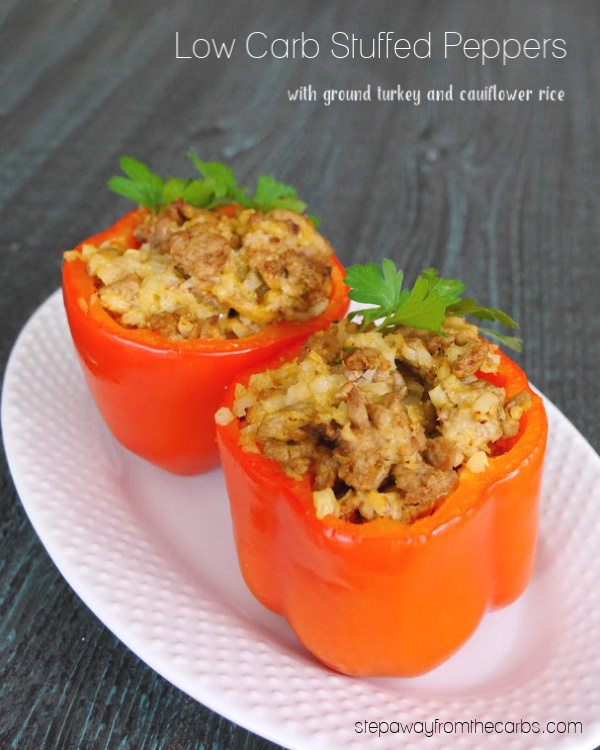 I've made keto stuffed peppers once before on the blog: Low Carb Halloween Peppers (with cute jack o'lantern faces!!). They featured a combination of cooked chopped chicken and cauliflower rice. This time I wanted to work on a similar recipe, but using ground turkey instead.

In the previous recipe, I boiled the bell peppers before stuffing and roasting, but I've omitted that step in this version – mostly due to laziness, I confess! But I really liked the contrast of the crunchy “shell” and the soft filling, so I think that's how I'll do it from now on. But obviously, if you prefer, just boil the peppers in water for five minutes (after you have hollowed them out).

Serve these keto stuffed bell peppers as a lunch or main meal – depending on how hungry you are!

How many carbs in red bell pepper?

One pepper contains only 3.3g net carbs for the whole pepper! Green bell peppers are about the same but I really don't like the aftertaste of the green peppers!

To make the filling, add some oil to a pan and cook the ground turkey until browned all over. Add some paprika and riced cauliflower (you can make your own – read my tutorial on how to make cauliflower rice.) or buy it ready riced for extra convenience! Continue to cook until the cauliflower is tender.

Meanwhile, prepare the peppers by removing the top, then removing seeds and anything else from inside. Also make sure that the peppers can stand up on their bases, slicing off a tiny sliver as necessary. 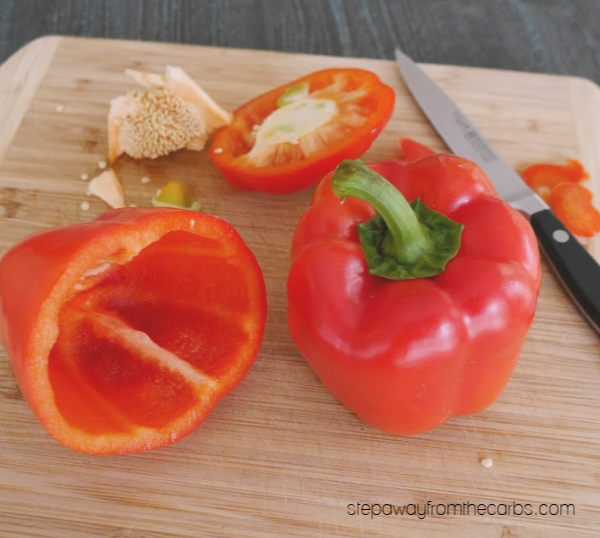 When the filling is cooked, stir in some shredded cheese (I used a mild cheddar – but pretty much anything would work!) and test for seasoning, adding salt and pepper as necessary. 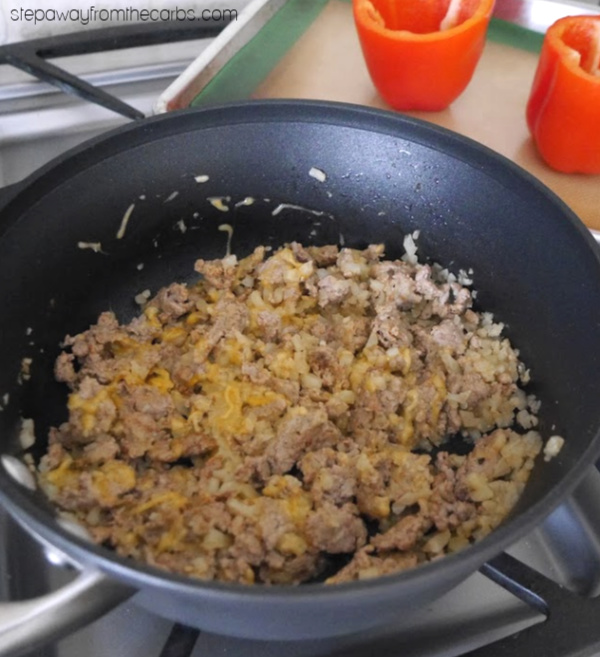 Divide the mixture between the peppers. 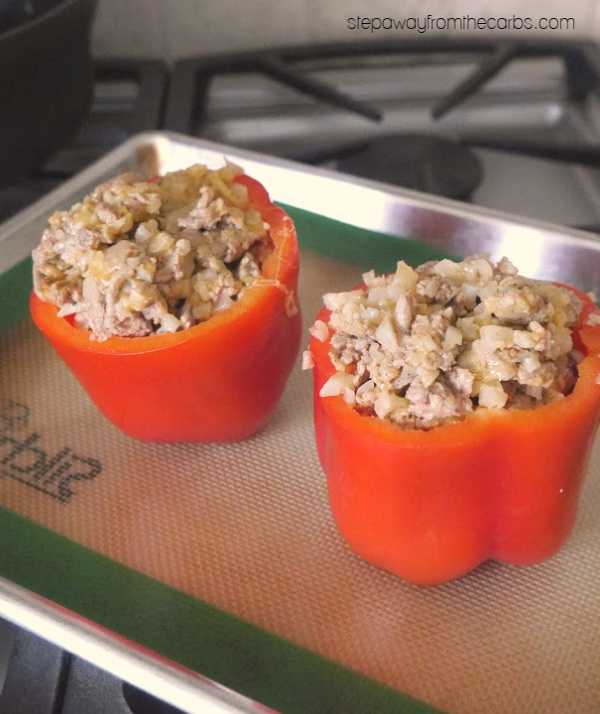 Roast these low carb and keto stuffed peppers in a preheated oven for 10-15 minutes.

Garnish with parsley, and serve! 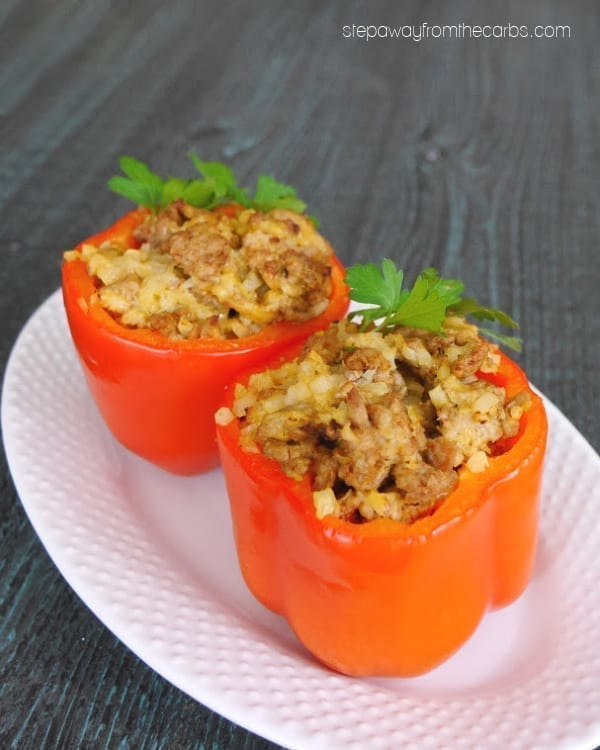 By the way – this recipe is the cover photo of my book Low Carb Meals With 5 Ingredients Or Less – it's available in paperback and ebook formats!!! Great for anyone following a keto diet! 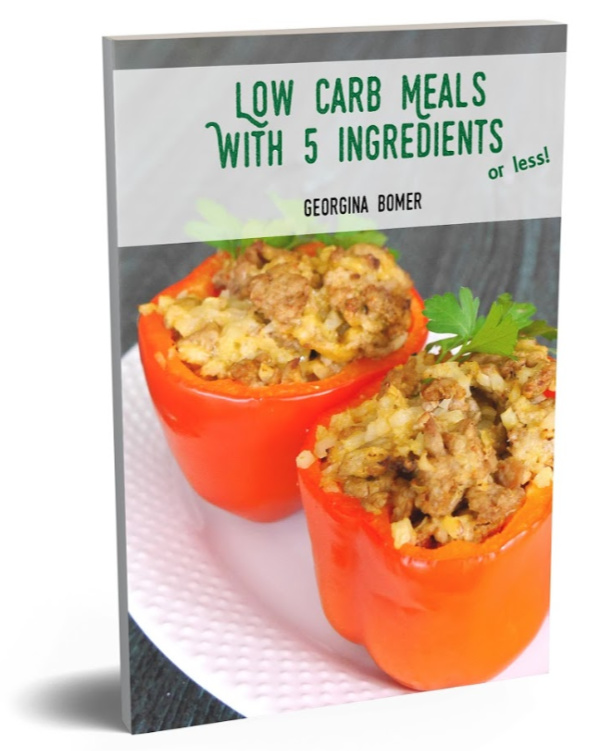 I really wanted to highlight how easy it is to make delicious low carb meals with only a handful of ingredients, and to demonstrate the kind of recipes that you're going to find in my book. Order your copy today!