This faux apple crumble is made with jicama, instead of apple! Low carb, sugar free, and gluten free recipe. 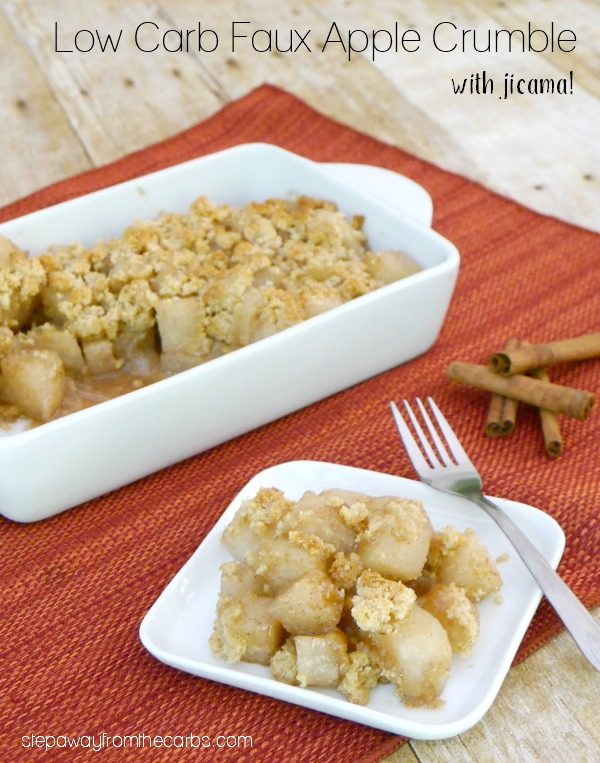 I was inspired to make this dish after I recently re-took photos for my yummy Rhubarb Crumble. As I was finishing revising the post I sighed to myself and thought “if only I could make a classic British APPLE crumble”.

And then light bulb moment. In my Low Carb Chocolate Recipes book I made a fake chocolate apple dessert by sautéing JICAMA in butter, cocoa powder, sweetener and cinnamon. It was delish – and although the jicama stays crisp, this handy low carb vegetable REALLY works in a sweet dish. Check out my whole collection of low carb jicama recipes! 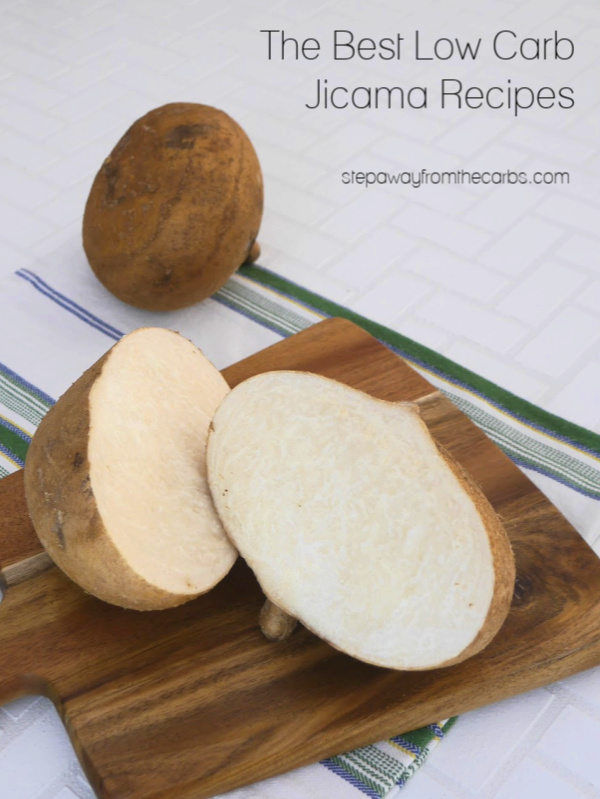 A-ha! Another light bulb moment! Since I made that fake apple dessert, I discovered the power of this Apple Flavor Baking Oil when I made the awesome Low Carb Donut Bites with Apple and Cinnamon. The pack contains two small vials – and you only need half of one vial for this recipe!

This combination was going to be EPIC – I could tell. And although a hot day in July was not the traditional time of year to experiment with this recipe – I just had to get started!

How to Make a Low Carb Faux Apple Crumble

To make the base, peel a large jicama and cut it into chunks (my jicama was about 2lb, and 1.9lb when peeled). 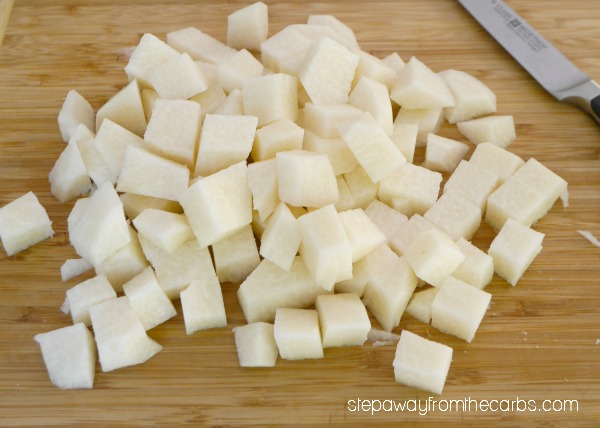 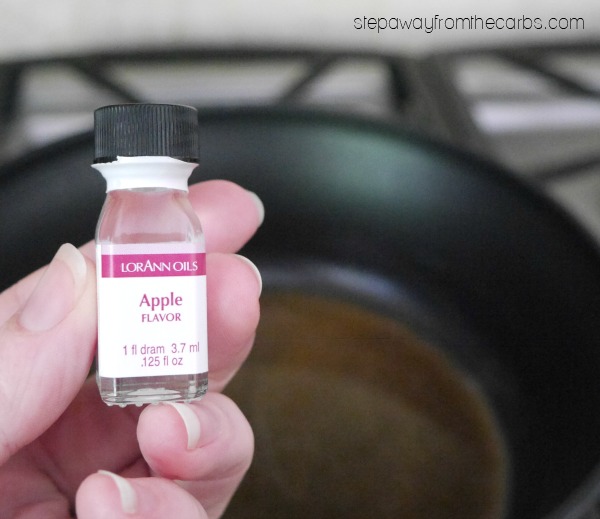 When a sauce has formed, add the jicama, stir well, then cover and cook for 15 minutes. 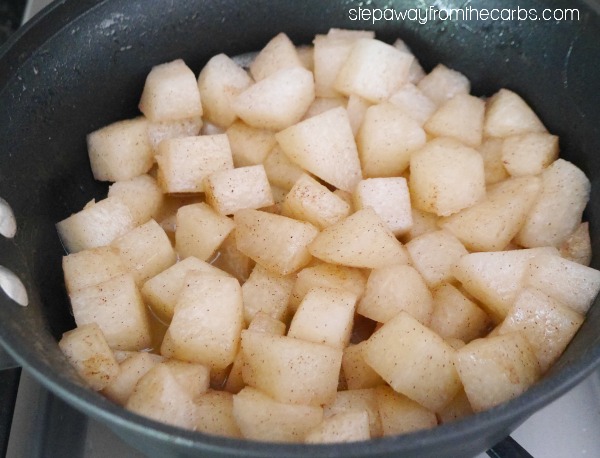 Meanwhile, make the topping by mixing low carb sweetener, flaxseed meal, and almond flour together. Add in some cold butter and crumble it together with your fingers, mixing the butter into the flour until large breadcrumbs form.

Transfer the jicama with its sauce to a baking dish – it will smell amazing! Then spread the topping over the jicama – it doesn't have to cover it completely. 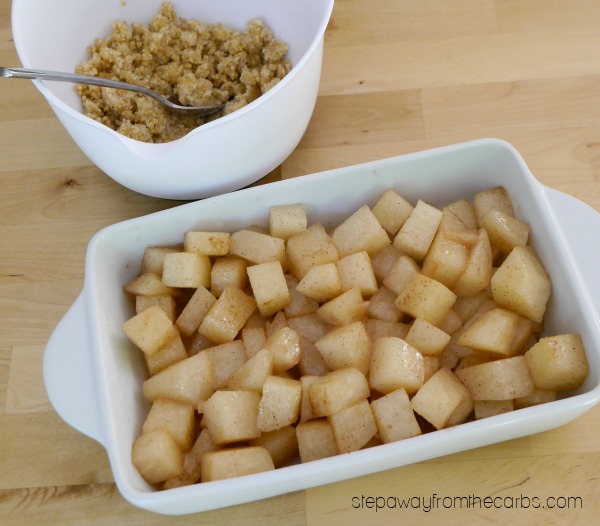 Cover with foil and bake in a preheated oven for 15 minutes, then remove the cover and continue to bake for another 5-10 minutes or until the topping has turned golden brown. 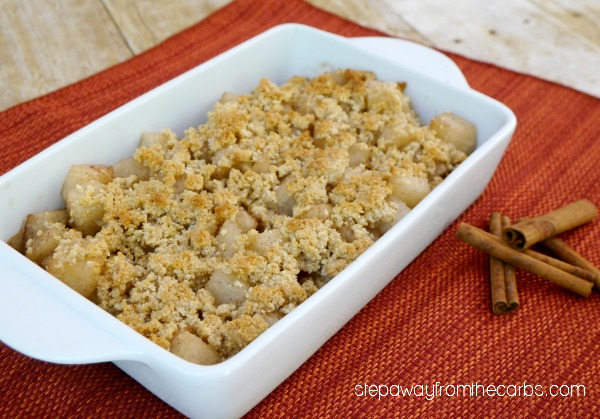 The texture of the jicama is like a crisp apple – but the combination of flavors with the butter, cinnamon, and crunchy topping is as good as I could have hoped for! 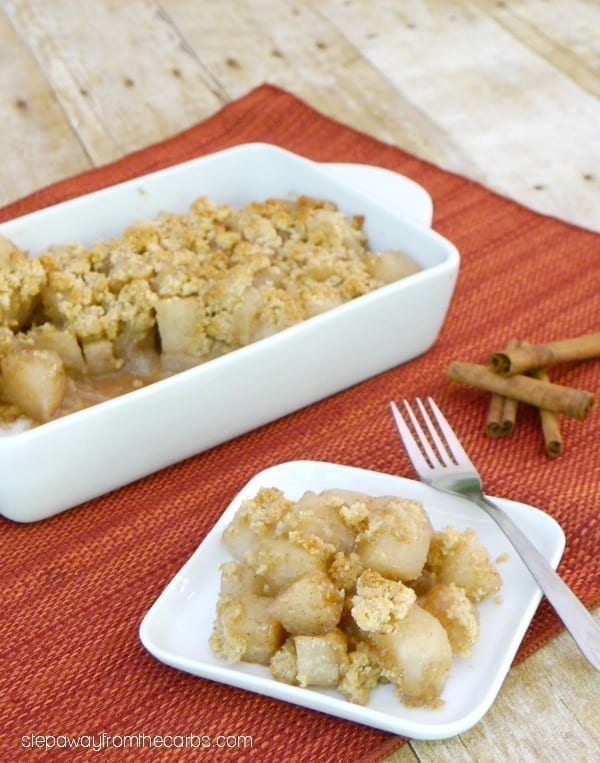 And yes, I *do* get the irony of this recipe that jicama isn't widely available in Britain – but sorry – I just had to try and see how it turned out! I'm thinking that if I write enough jicama recipes they might make it available! In the meantime, if you're looking for something a little more traditional, try these Keto Mixed Berry Crumble Pots from Beauty and the Foodie! Or my new Low Carb Blueberry Cream Cheese Crumble recipe!

8g net carbs per serving (one sixth of whole recipe).

Yes - just under ½ teaspoon. I added it to the recipe. Enjoy!

I'VE MADE MOCK APPLE PIE WITH CHAYOTE SQUASH AND IT REALLY DID TASTE LIKE APPLE PIE. NO ONE COULD GUESS WHAT IT WAS. AND IT DOES NOT NEED TO BE PEELED.

i'M MAKING THIS RECIPE NOW AND WONDERED IF THE SQUASH WOULDN'T HAVE BEEN EASIER TO WORK WITH, (CUT MY FINGER PEELING THE JICAMA, OUCH).

Please what is jicama l have never heard of it ????

It's a root vegetable often used in Mexican cooking - so depending in where you live it might not be available! I'm in the Midwest, and can find it easily in grocery stores.

Do you think using ground chia instead of ground flax would make much difference?

I've honestly never used ground chia as an alternative for flax. I don't think it would affect the carb count too much but no idea bout the texture I'm afraid!

Could this be made with cyote squash instead and cute back on apple extract and xylitol I believe cooking time might be shortened.

I'm afraid I've never cooked with chayote squash, so I'm not sure. But if you try it, please let me know how it turns out! Georgina