This low carb skillet cookie is a fantastic dessert to share! It's a sugar free, gluten free, dairy free, and keto friendly recipe! 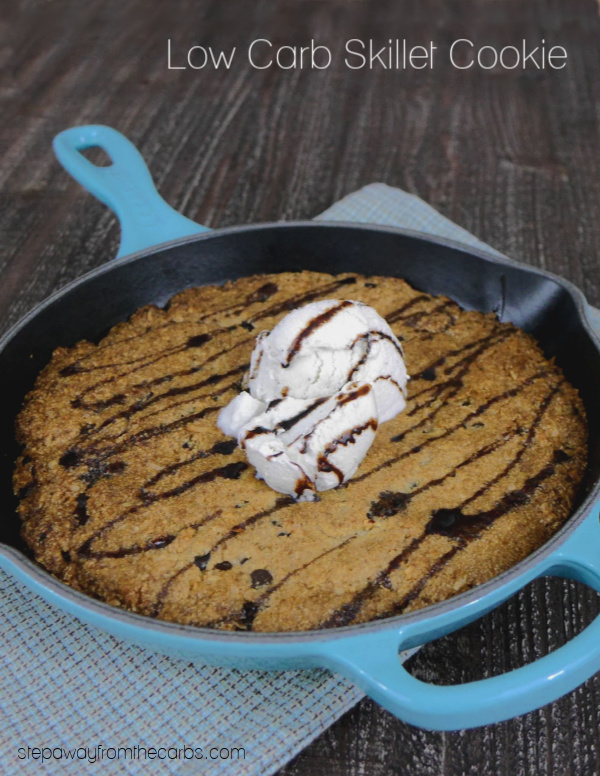 Disclosure: I was provided with this book from Victory Belt Publishing free of charge in exchange for my fair and honest review. Please see my disclosure policy. This post also contains affiliate links, which means that at no extra cost to you I can make a tiny bit of money to help support this blog. Thank you!

I'm sure you all know by now how much I love Carolyn Ketchum's books – well… she's released another one! It's a huge book with over 150 recipes: The Ultimate Guide to Keto Baking! 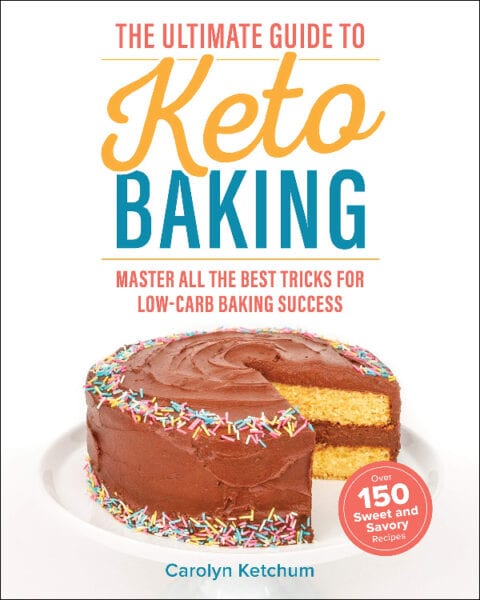 Unless you're a really confident low carb baker (which I am not!) you'll really benefit from this book. The introduction alone is a fascinating read – and utterly comprehensive! There are a TON of recipes that I wanted to try out – even down to the recipe on the front cover! In fact I immediately went and ordered those low carb sprinkles from Amazon!

My 8-year old son joined me looking through the book, and when he saw the recipe for chocolate chip skillet cookie, that was game over for him – he had decided what I would make!

With Carolyn's permission I am reproducing the recipe here, but all photos are my own.

In a stand mixer, whisk together almond flour, shredded unsweetened coconut, brown Swerve, regular sweetener (I used Lakanto – get 20% off if you use coupon code SAFTC!), baking soda and salt. I have only just discovered the brown Swerve and recently used it for my Pecan Pie Brownies! 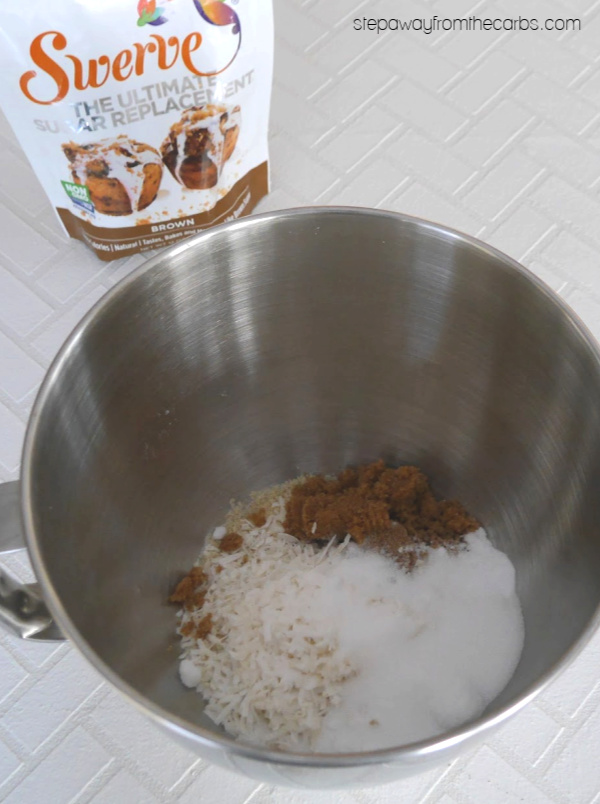 Add some melted coconut oil, an egg, and vanilla extract and beat on a low speed until combined. Add in some low carb chocolate chips (I was all out of Lily's Baking Chips so I used the Know Better chips instead. They’re zero carb, sweetened with allulose, and you can buy them from Netrition). 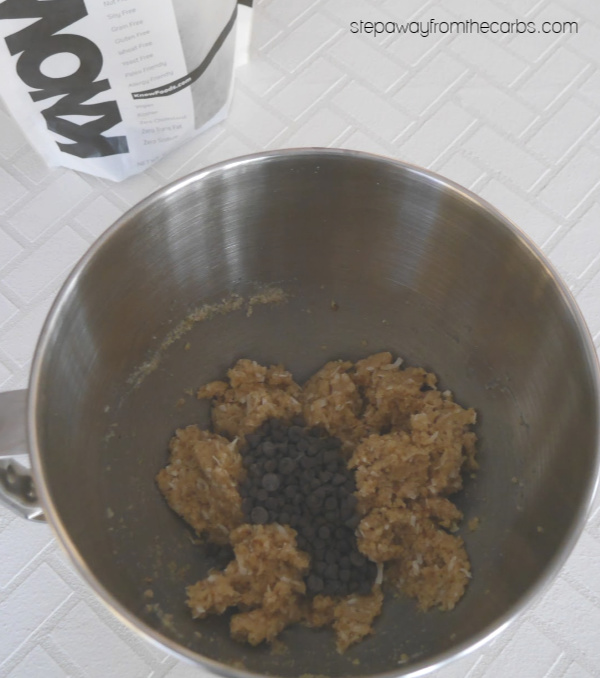 Stir to combine, then press the mixture into a greased cast iron skillet. 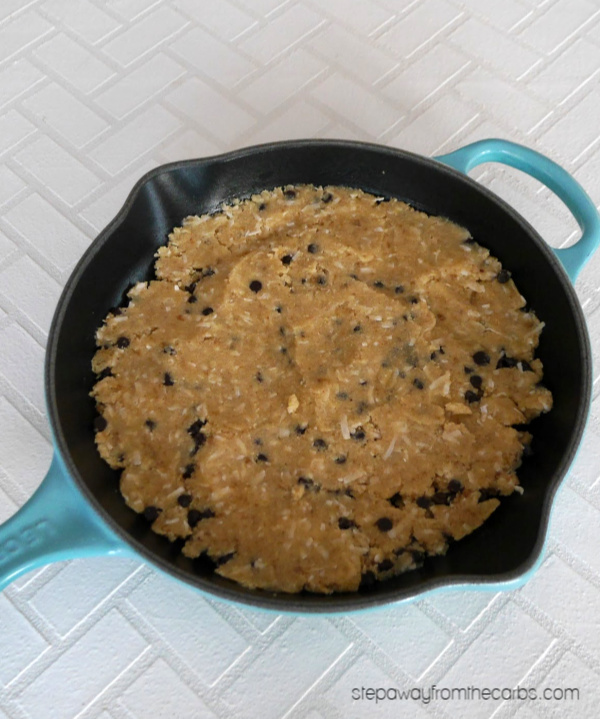 Bake in a preheated oven for 20 minutes or until light golden brown.

Let cool a little before serving. You can either cut it into slices or just let everyone dig in! 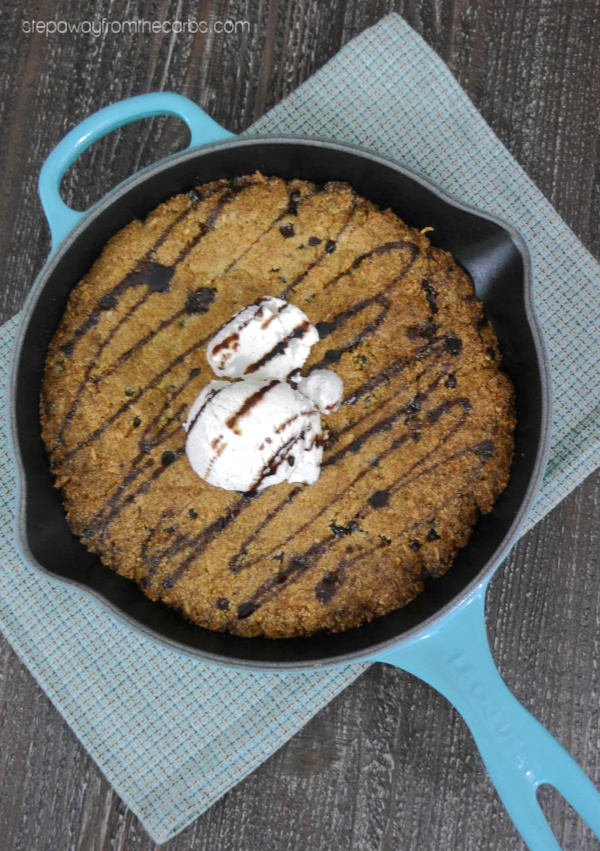 You can also add some low carb vanilla ice cream and/or chocolate syrup or glaze to serve – and yes, there are recipes in the book for those too! 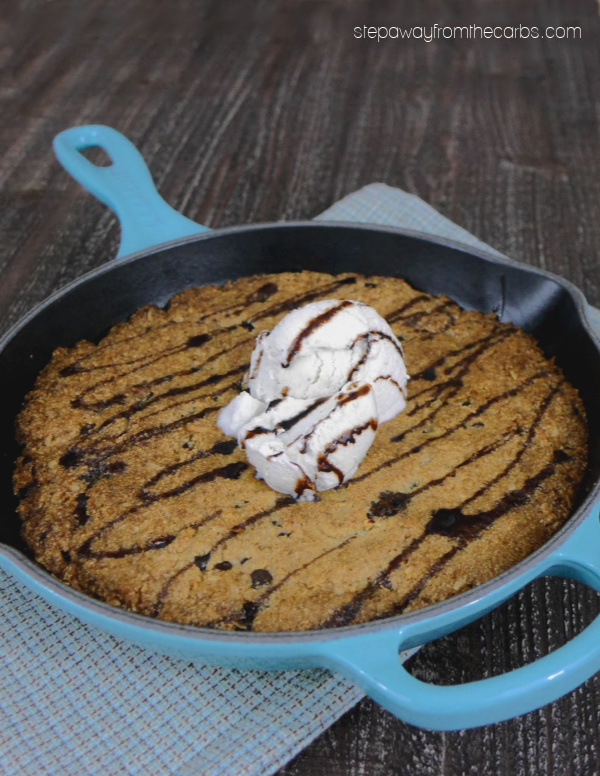 In my opinion this dessert is best eaten warm, but if you do have any left over, crumble it up and make it into a low carb ice cream topping!

Next up on my list? The Boston Cream Poke Cake and the Classic Yellow Birthday Cake. It has to be someone's birthday somewhere, right?

4g net carbs per serving (one eighth of the recipe).

You can also add some low carb vanilla ice cream and/or chocolate syrup or glaze to serve - and yes, there are recipes in the book for those too!

This recipe sounds great. May I ask what size the skillet is? Thank you for all your work!!

Great flavor, I would add nuts too next time.

Thanks so much, Georgina! I appreciate your review.